In Sue’s twenty-five-year career at Multnomah County Animal Services (MCAS), she has worn many hats, including animal care worker, field services officer, dispatcher, and Certified Veterinary Technician (CVT). Sue’s parting guidance before retirement is to work through challenges together, and keep moving forward.

Prior to working for MCAS, Sue had already been a veterinary technician for some time, and trained students in the Veterinary Technology program at Portland Community College in Hillsboro. She also received her Masters degree in science and teaching, with the goal of teaching biology. However, after receiving her degree, there was a shortage of teaching jobs available, and Sue decided to pursue animal welfare jobs closer to home to shorten her commute and find something temporary while she waited for the right opportunity.

Sue started out at MCAS as an Animal Care Technician. “It was a very challenging job, and still is,” Sue says. At the time, there was not an Animal Hospital on site at MCAS, nor a full time vet on duty, which narrowed the possibility to resume a vet tech position.

Sue later chose the path of an Animal Control Officer, a role which she filled for almost ten years. She enjoyed some of the direct work with the public and their animals, but it was sometimes difficult to be apart from other staff members, spending the day in a truck.

Sue vividly remembers a case of neglect and abandonment involving a stallion, two pregnant mares, some chickens, and a dog. As much as officers pursue opportunities to help animal owners correct problems and keep their animals, Sue was eventually compelled to seize the animals. The silver lining in this large and stressful case was watching all of the animals involved find new homes where they would be cared for.

During a year with steep county budget cuts, Sue was laid off from her position, along with many other officers, dispatchers, and staff members at the time. Thankfully, Sue was able to be hired on in another capacity as a dispatcher for animal control officers. For Sue, it was the epitome of multi-tasking- checking in on officers, answering the emergency line, and then completing paperwork. A lot of work went into getting officers the information they needed to respond.

A major improvement for MCAS was the development of the shelter Animal Hospital. Rooms were repurposed and developed with exam tables and equipment, and a surgery suite and prep area were also built. MCAS hired a full time veterinarian, and Sue seized the opportunity to apply for a newly opened CVT position.

As a vet tech, Sue felt more at home, and able to pursue her career and interests.

Her favorite thing in her role is being able to see all the animals during her daily rounds. “I look at every animal here as I’m going around each morning and doing treatments, and check with animal care staff about how they’re eating,” Sue says. “That experience of seeing every animal every day is my favorite part of the job, and tracking their progress through the shelter.”

Throughout her career, Sue has seen many changes and improvements. One observation is that our community as a whole has changed to be more conscientious of animals. As an officer, Sue recalls seeing many more dogs at large than we take in now. Spay and neuter efforts, and helping to keep pets safe at home are credited with some of that change.

“We used to take in two or three times more animals than we do now,” Sue says. “At reduced capacity, we’re able to do much more for each animal, medically and behaviorally. The growth of the foster program has also made a big difference for the individualized care of animals.

We are working on improvements all the time. It’s a tremendous accomplishment and relief in itself to be able to save more animals and have a high live-release-rate. Another thing that I think is improved is that we’re focusing on moving animals through the shelter as fast as we can- either to be reunited with their families, adopted, or transferred to community adoption partners. That can make a big difference in shelter capacity, and the health of the animals. Also, creating individual plans for the animals based on their needs, since what works for one animal doesn’t always work for another.”

One thing that sticks out for Sue was the creation of the Kitten Triage Program, which works to address the immediate needs of incoming kittens, and place them in foster homes. Before the program, there wasn’t a foster network to take kittens when they would come in, and shelter staff lacked the resources or capacity to meet the needs of kittens when they would arrive. These are hard memories for Sue, who would often be tasked with humanely euthanizing litters of kittens upon arrival. “I vividly remember a beautiful litter of fluffy, orange kittens. With nobody to take them, and no resources to meet their urgent, immediate needs, we had to choose the most humane option available to us, which was a tragic reality for our shelter and many others.” Sue is grateful to the foster volunteers, staff, and the support of the community for the Kitten Triage Program, which has saved over ninety-percent of kittens since its institution nearly ten years ago.

When asked what her immediate plans are for retirement, Sue says she plans to do the same things she’s doing now outside of work, but now she gets to bump those other activities up in priority.

Sue plans to step up her golf game with her husband, Jim, and spend more time with her father, who is a very active nonagenarian.

Sue enjoys working her sixteen acres of land, complete with cows, her horse, and other animals, and is excited to take on a handful of back-logged projects.

She plans to go trail riding more often at Milo McIver Park in Estacada, and on her super-secret trail in the Molalla River Corridor. “I’ll tell you that there’s a wonderful trail system up there, but I’m not going to disclose where I park to get to it,” Sue says.

Hopes and Dreams for MCAS

Sue wishes the best for the success of MCAS as an organization, for the employees, and the animals. “There’s only so much you can do with this facility,” Sue says. “While I wish I could show you pictures of all the great improvements to this building over time, we’ve reached our limits. I hope for the grand opening of a new Animal Services facility in my lifetime. I can’t wait to come for the grand opening!”

“I think that every person here has made an impact, and has an important role to play. The bottom line is that this type of work brings together a lot of people from all different backgrounds and ideas. Everyone has a different skill set and perspective, and we all share the common goal of helping the animals.”

“I’ll miss the staff of the Animal Hospital, and everyone else. Roberta has been my partner here for a long time, and I’ll miss her dearly.”

“The most important thing for us is just to focus on moving forward. Now, when we look back on all the challenges we faced, and our memories of them- both good and bad- it’s important to remember that we got through them by working together.”

Thank you, Sue, for your many years of service to the pets and people of Multnomah County. We will miss you, and we wish you the best in your retirement. 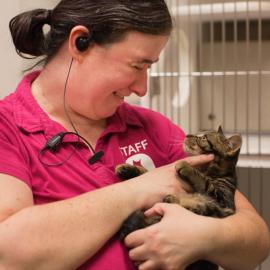 Melinda Hickey is retiring after eight and a half years. 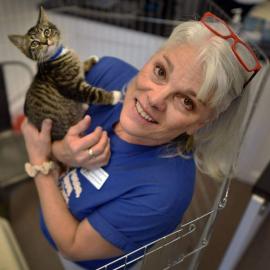 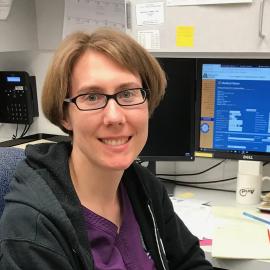 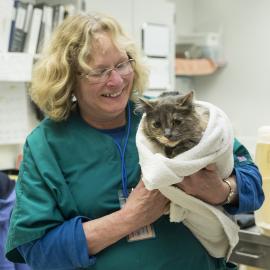 Meet the staff members of Multnomah County Animal Services. Celebrate their milestones and read about their perspective on their work at MCAS.
Read more