Martian is the most outgoing and sociable dog! I've never seen such a turn around, quite literally as soon as we got into my truck!! I was prepared for this nervous and skittish little dog, and by the time we got to our first stop, Walmart, for some grain, high protein free senior small bite food (which to my amazement he scarfs down wiggling his entire body while doing a little dance on two legs) he was standing up in the cart (on my jacket because who wants to sit in a cart without some cushion?!) greeting everyone like he'd never had a worry in his life! He does start fights with other dogs larger than him if they invade his space, (a 125lb GSD cowered down from this 24lb ball of floof! Naughty Lil boy!!) but we are working on correcting that with positive reinforcement and redirection. He's doing absolutely amazing. No vomiting, nervous behavior, or shaking as I was advised of during the adoption process as well as noted in his paperwork. I may never get to go to the bathroom alone again, but he's amazing and I don't mind his cute little love muffin self! Also, HE LOVES MY HAIR DRYER. He will howl and cry until I blow dry him. He's currently received two baths. One on adoption evening and one the following day because he was so excited to have an owner and couldn't believe I would be so rude to close the bathroom door or shower curtain. Haha. He proceeded to sit right in the tub , happily wiggling his little nub like no tomorrow. Goodness he's got quite a personality that's just really hard to not like. Thank you guys for helping me bring in this fella. I'd love to bring him by when I'm in the area so everyone can see this fluffy happy and very energetic dog who walks so happily and prances with such confidence it's crazy. I feel like I got myself a little one year old puppy. I think he was just tricking you guys on his age! . He's currently telling me that he would like some more raw asparagus ends so, duty calls! Well anyways, until next time. Thanks again!

Julius, adopted five years ago, loves everyone and has completed their family. 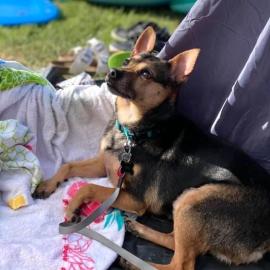 Cosmo, formerly Travis, has brought joy and companionship to the Gonzalez household!

Frappuccino is getting all the love, fruit and veggies, toys, and guinea pig friends in their new home.

Thurston overcame his leash-pulling tendencies, and the NEXT thing is always his FAVORITE thing! 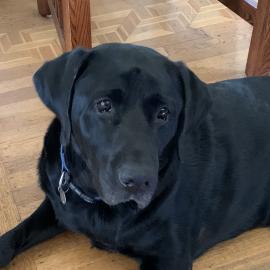