Since Blazer S. started volunteering eighteen years ago, her niche has always been to foster animals most in need, who may not have made it without her help. Through the years, she has helped to expand the capacity of Multnomah County Animal Services (MCAS) for young kittens.

No, that’s not a typo for snuggling. Yes, we mean smuggling.

While Blazer can’t remember exactly how she started volunteering, she remembers her first group of siamese kittens, and that the circumstances in which she took them home were relatively informal compared to the foster program of today. There wasn’t a lot of formal vetting or training for foster volunteers, but staff were grateful to anyone who was ready and willing to help.

Blazer served as a lifeline for at-risk kittens. Before the kitten triage program was created in 2012 to care for young kittens and place them in foster homes to raise them, MCAS had very limited capacity to care for unweaned kittens without their mother. Unweaned kittens under two months old were most often humanely euthanized due to a lack of resources to care for them. In Blazer’s terms- with some inside help from enterprising and pragmatic staff members in Animal Health and Animal Care- she “smuggled kittens out of the shelter, then fed and cared for them until they were at weight- 2.1 pounds- before bringing them back.”

At home, Blazer had help from her two young daughters- Cas and Reegin- who were both toddlers at the time Blazer started fostering. “I have great, funny memories of those little girls helping to potty kittens,” Blazer says. “In the beginning, part of my motivation was wanting to teach my kids about empathy, compassion, and giving without expecting something in return.”

“I have always wanted to help the animals that may be falling through the cracks,” Blazer says. “Yes, it’s exhausting and heartbreaking sometimes, and my fosters- the neonatal kittens- have a high mortality rate without mom. But I’m better at taking ones that I know may not have a shot otherwise.”

“The way I see it, we domesticated these animals. We put them in a position where they have to rely on us. So I just want to do what I can to give them a bit of warmth, some love, and a full belly. Even if they’re going to pass away, I want to give them a shot. My goal is just to do that.”

As MCAS gradually increased its capacity to care for young kittens, Blazer raised the bar on the types of fosters she wanted to take on. There were more foster volunteers available for litters of unweaned kittens, so Blazer started taking more unsocial kittens who weren’t used to people.

“My home is really ideal for socializing kittens,” Blazer says. “There are lots of people, and other cats and dogs, so the kittens are exposed to lots of stimuli and scenarios, and usually give in pretty quick to the love we’re giving them.”

Cas and Reegin grew up, and are able to offer more support to their mom. Additionally, Blazer’s partner Jay offers support around the clock. “If I’m at work, or if animals need help at night, everyone steps in to help,” Blazer says.

Blazer started taking on more cases needing medical care, including kittens with eye trauma due to calicivirus (FCV), which can cause severe upper-respiratory infections resulting in conjunctivitis and ulcerated corneas in young kittens.

Blazer started treating eye trauma kittens with a very special case and his brothers- Sir Stuffington, found in September 2013. When they were found, Sir Stuffington’s eye had already ruptured, and Blazer and her family were faced with the task of nursing Stuffy and his brothers back to health. He quickly found his way into Blazer’s heart, and the hearts of 50,000 other Facebook followers who keep tabs on him.

For Blazer and family, their eye-trauma fosters have all been really memorable, partly because they were a lot of work! To save their eyes, most need hot compresses and medication every four hours or so. Having a lot of people to share the responsibility can help with that.

Off the top of her head, Blazer recalls her fosters. There was Butterfly Olive, Captain Jack - a recent little miracle kitten- and Autumn, who had Chlamydia in both eyes.

There was also Borris- the silent killer. Borris was already a few months old, but was part of a larger litter before being sent to Blazer’s house to put on weight. He was bald, malnourished, and refused to eat. Blazer basically helped to force-feed him for six months to get him to a reasonable weight. Of course, she ended up keeping him. “We all have our limits on how long we can keep an animal before we become attached and keep them,” Blazer says. “For me, it’s around six to nine months, I’ve noticed.”

Little Danny the kitten was two weeks old when he came to them and developed what can only be described as a prolific case of nipple-confusion, and wouldn’t leave his poor brothers alone! It got to the point where he had to be separated from the rest of the litter to avoid inadvertently mutilating his siblings, and he was naturally sent to Blazer’s house for further care. “Cas raised Danny and got attached to him, so we kept him,” Blazer says.

Blazer has always been a strong advocate for the animals of MCAS through her actions. She is consistently ahead of her time, and a mover and a shaker to try and create better lives and outcomes for individual animals in need of help.

For Blazer, her involvement with MCAS is behind the scenes, on the back end of things. “I don’t get involved with the outward policies or politics of MCAS as an organization. I work closely with the people I know and trust, and just do what I have to do for the animals. Even when I disagree with a decision, when I’m sad, frustrated, disappointed, or upset- I’m in it for the animals- I don’t want to withhold my help for them because I’m hurt.”

“Roberta R. in Animal Health has been my ride or die for a long time. She’s great, she’s been the person I’ve worked with most over the years, helping with Sir Stuffington and other special medical cases. I once took in a foster kitten that had an undiagnosed case of feline distemper (Feline Panleukopenia, or FPV) that slipped under the radar before being sent to my house, and the entire litter passed away. Roberta got me into the shelter and listened, and comforted me.”

Blazer also works very closely with Jackie V., who specializes in kitten care at MCAS. “Jackie always knows when to call me when she has a special case that needs help, and Jackie knows I can never tell her no,” Blazer says.

“People are always asking how we can foster without keeping every single one. The way I see it- the more animals I keep, the less I can save. When I adopt, I don’t usually adopt the kittens, I’m usually taking the senior pets in need of a hospice home to live out the rest of their lives. If I kept all those perfectly healthy, wonderful kittens that would be potentially awesome for someone else, then I wouldn’t be able to save the other animals in bad shape that I’m usually taking care of.”

“Another thing I’m asked about is what helps when I’m feeling burnt-out and needing to recharge. Honestly, I don’t know what helps! For me, I refocus my energy on giving other animals love and attention. I have a lot of my own animals that are all really hot messes, too. They can be a nice distraction.”

When Blazer isn’t fostering kittens for MCAS, she and her family also volunteer with a local horse rescue, and a guinea pig rescue. Blazer works at Exclusive Pet Supply off of 223rd and Halsey, where she helps procure donations of food and other supplies for shelter animals. She also works as a veterinary assistant at Scales and Tails Exotic Pet Clinic.

“Blazer is up for anything. Anything her foster pets offer her as a challenge, she meets it and overcomes it. She and her daughters fight fiercely for these little lives. She is so great to work with and makes what we do fun and exciting. Whether it is kittens, guinea pigs or tiny senior pups- they have found luck when they enter her home.”

"I have worked with Blazer for over 15 years and she has saved hundreds of lives. She is a tireless advocate for the animals and has fostered so many challenging pets. I especially remember the Sir Stuffington case and how it took off on social media, the local news, and even made People magazine, creating awareness of what we do at MCAS and sending a great message out to the public that fostering saves lives. I have loved getting to know this amazing woman over the years and also seeing her 2 daughters go from being little toddlers to growing into compassionate caring women. And her partner Jay is terrific and together they all provide a warm safe haven for these animals to grow and blossom into adoptable pets. I have always enjoyed each appointment and interaction with them. Blazer has a huge heart and wonderful capacity to give of herself. Congratulations!"

Thank you, Blazer, Cas, Reegin, and Jay, for your compassionate service for the animals and people of Multnomah County. 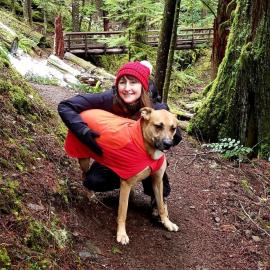 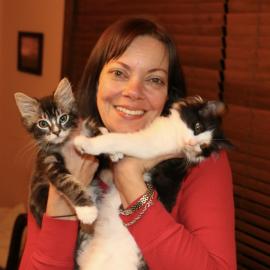 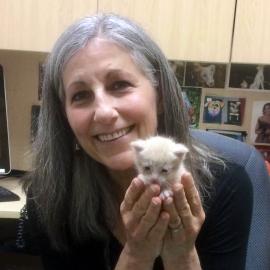 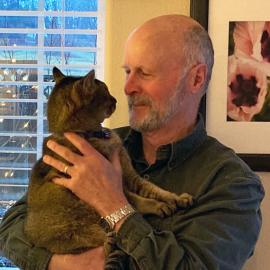